Jasmine from Wayward Girls' Crafts here! I made some dyed rice, but once it was done, I had no idea what to do with it. The first idea didn't really work so I didn't do anything with that. The second idea was a flower. After I drew it on the canvas, I decided to go for it. 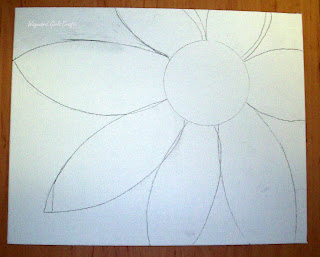 I used a jar lid for the center and free handed the petals. I figured the pencil lines wouldn't show since there would be rice covering it. 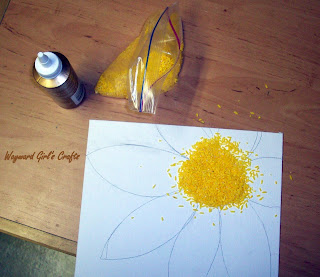 The first area I decided to cover was the center. I poured some Tacky glue on the circle and spread it out with my finger. I didn't have a paint brush so I used the next best thing ;) I made sure there was a thick enough layer of glue so the rice could settle in it and not fall off easily. Then I poured a handful of rice onto the glue. I tapped the rice down so it stuck to the glue. 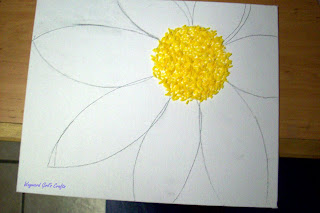 After letting it set up for a few seconds, I took the canvas and tipped it so the excess rice would fall off. I poured the excess onto a sheet of paper so I could put the extra rice back in the baggy easily. 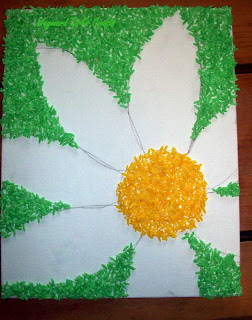 Then, I covered the background using the same technique. Instead of filling in the whole petal, I decided to let some white show and give the picture more texture (as if it didn't have any before!) Also, I was just lazy. I only put a thick line of glue on the outline of the petals and added pink. I then added those line thingy things on flowers (technical term, I know.) I used a thicker line of glue and made it slightly more narrow going away from the center. I tapped and tipped again and set it aside to dry. 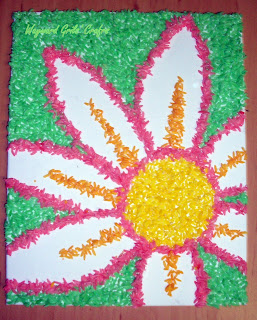 It didn't take too long to set up and dry. Now it's all ready to find a home somewhere in my apartment!
Posted by WaywardGirlsCrafts at 9:14 AM

Promote Your Page Too 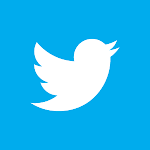